Give Ground-nesting birds a chance

We're calling for local people to help protect ground-nesting birds on the Malvern Hills and commons.

Small signs have been erected near to where ground-nesting birds are known to nest on Malvern Common, asking walkers to keep to paths in these areas or to take an alternative route to reduce levels of disturbance.

As the name suggests, ground-nesting birds, including meadow pipits and skylarks, make their nests and raise their young on the ground rather than in a tree or bush.  This means that they are susceptible to disturbance by people and loose dogs.

Beck Baker, Community and Conservation Officer for the Trust said ‘It is especially important that dog walkers keep their dogs to the paths, close to heel or on a short lead in these areas to help protect our local wildlife.’

‘Even if your dog means no harm to the birds, the adult birds will see the dog as a threat and could abandon its nest.  If the adults are away for too long, the eggs or chicks may get too cold and die.’

The nesting season for ground-nesting birds lasts from the 1st of March to the 31st July and birds may make up to three attempts at nesting during this period.

We are continuing our ongoing conservation work to clear scrub and trees from the upper slopes of the Hills during the winter, followed by sheep and cattle grazing, to restore the open grassland habitat.  This is essential for encouraging the breeding of these birds that avoid nesting within 200 metres of a tree.

Beck added ‘We’ve seen a decrease in the number of ground-nesting birds on the Hills and Commons but by working together we can provide the best environment possible for this year’s breeding season.’

Further signs will be placed on the Malvern Hills where birds are known to nest to provide information, particularly for dog walkers. 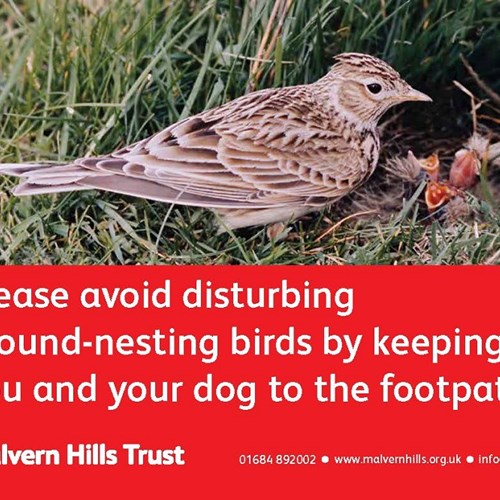