Cattle return to the Old Hills

A small herd of Highland Cattle will be returning this weekend to graze the Old Hills, Callow End.

The grazing is part of the Malvern Hills Trust’s work to conserve the open grassland and flower-rich meadow habitats of this area of common land.

Following the loss of traditional grazing of livestock on the Old Hills, some areas have become more and more overgrown with scrub and trees.  This has led to a reduction in the amount of open grassland, which supports a wide variety of species.

An increase in the amount of trees and scrub also means that visitors are now unable to walk or ride horses in some part of the Old Hills due to the thick vegetation.

The Highland Cattle, a breed with characteristics suitable for grazing on rougher ground, will be nibbling off the young saplings and brambles over the next two to three months.

Temporary electric-fenced compartments will be in place to concentrate the cattle grazing on specific areas.

Signage has been put up at the Old Hills to alert visitors to the presence of livestock and remind dog owners to put their dogs on a lead to keep the cattle safe.

Andy Pearce, Conservation Officer, who’s been working on the grazing project said, ‘By maintaining the grassland using natural and traditional methods we are working to preserve habitats, maintain landscape character, open up views and keep the common accessible for people to enjoy.

Over the last four years the cattle have been working their way through the scrub and opened up areas that were impenetrable.'

The Old Hills were once grazed by cattle and sheep all year round by local farmers.  The land is still registered as common land which means that at any time, commoners with grazing rights can put their livestock up on the Old Hills.

When the last cattle and sheep left the Old Hills, as grazing here became uneconomical and the roads got busier, the trees and scrub started to encroach the grassland and these open areas were lost. 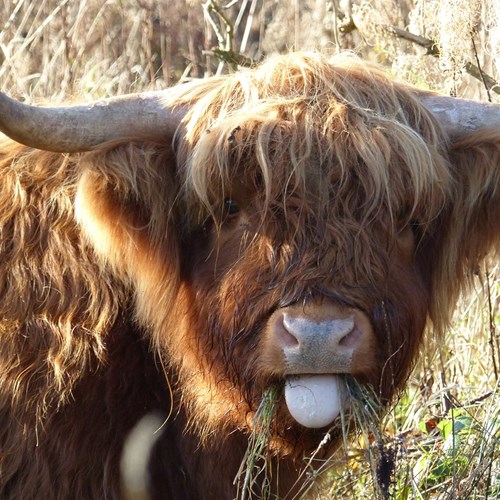